Drysuit test dive at the Breakwater

A and I picked up our shiny new DUI TLS350 Signature series drysuits from Anywater a couple of weeks ago. We had already done a pool dive a week ago to make sure everything fit OK and there were no obvious problems but this was our first dive in them out in the real world. This was also the first time we would be using our new-to-us steel tanks.

About the tanks - I picked up 4 Worthington X7 HP100s last month that were just a month out of their factory hydro date. Even after getting them hydro'd, they still ended up costing me less than half of what I would have paid new :)

They came with the Vindicator knobs. I'm ambivalent about them - don't mind having them but probably wouldn't spend extra to upgrade to them. 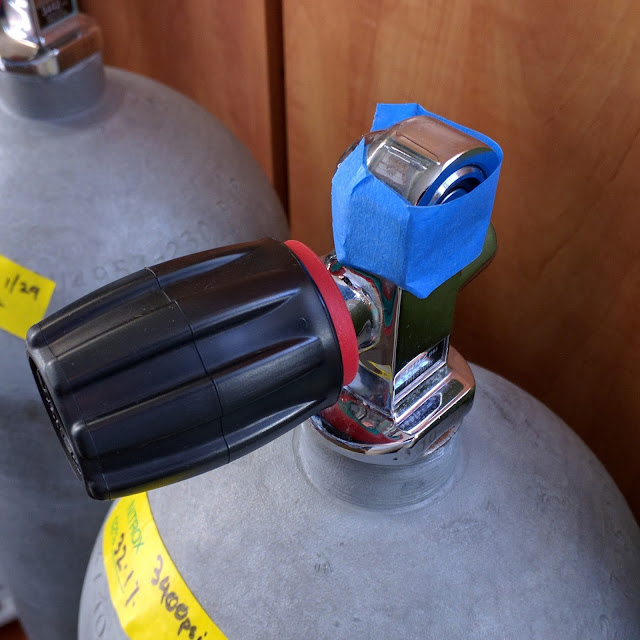 Anyhoo, back to the diving. I had adjusted the straps on my plate to give me 3" more at the shoulder. Once I'd done that, I discovered my waist straps were just a little bit too short. D'oh!

Our plan was to do 1 or 2 dives at the Breakwater but we got a later start than usual and didn't get there till just before noon. Kitting up took longer than usual as I kept messing with my suit. In the water, we attempted to stabilize and were mostly successful maintaining decent control once we got to about 20ft. There was a fair bit of arm waving as we let the suit get ahead of us and we had to try and get back down. On one occasion, my flailing wasn't quite enough to arrest my inexorable journey up - I managed to slow it down a bit but I ended up on the surface from 30ft. Boo :( A had similar issues so we called the dive at that point and surface swam back to the beach. I think a couple of pounds more are in order.
-> 39ft, 39min, 59F

We saw a juvenile elephant seal on the rocks on our way out, another sign of the unusually high water temps this year as they don't normally come this up far north.
Monterey was also struck by a very widespread power outage. All the stores, cafes and restaurants were closed - pretty spooky as we walked Cannery Row and Lighthouse Ave. Post dive at Red Robin.