A and I just got back from a trip to Baja California Sur. We were there for a week - 3 days each in Cabo Pulmo and La Paz, 9 dives over 4 days.


There and back again

We flew between San Francisco and San Jose del Cabo non-stop. I’ve been to a lot of airports and SJD is by far the fastest and easiest immigrations+customs experience I’ve had (which makes sense considering it’s almost exclusively a tourist centric location). I would highly recommend making SJD your port of entry into Mexico as opposed to going through Mexico City, which I’ve been told can be super busy and a bit of a clusterfudge.

Getting around
We hired a private taxi for all 3 legs of the trip - airport -> Cabo Pulmo, Cabo Pulmo -> La Paz, La Paz -> airport. We got the contact of the driver from the Cabo Pulmo dive shop. Renting a car and driving ourselves around would have been much cheaper but we decided to go for convenient and easy instead. We had the same driver throughout and he was awesome. We got great recommendations from him for restaurants and info about dive sites. Even for future trips, I would still opt to be driven around simply so we can nap on the drives.


Cabo Pulmo
We stayed at the Cabo Pulmo Beach Resort in their Eco Bungalow and dove with their house shop which was a 5min walk. The village itself is tiny with 1 street that’s maybe 2 blocks long and has about 5 restaurants (1 of which never seems to be open).

All dives are off small boats in groups of 6 or so. The sites at the northern end of the park have more current, whereas the southern sites are more protected. The surface is really calm and there’s practically no chop or swell.

Since the diving in Cabo Pulmo is inside the marine reserve, there are certain restrictions on what you can do and almost all are pretty strictly enforced. I did not know about these until I got there, none of the dive shops or resorts made mention of this (I checked the government park’s page after getting back and found some of the info but it’s not obvious if you’re just browsing around). None of these impacted our diving but I can totally see how it can seem limiting to some divers.

- You have to follow and keep up with the dive guide, there’s no option to dive a site on your own and due to this, the dive briefings are pretty minimal. You’re also live boating and they expect you to surface as a group (barring any emergency, of course)
- Dives are to be 50min max, doesn’t matter how much gas you have left in your tank.
- You have to stay at least 8ft off the reef. Depending on how the guide thinks your buoyancy control is, they might give you a little leeway here but, in general, they will give you the signal to increase the distance between you and the reef almost all the time if you get close up to take a peek at something.
- They have quotas on how many divers can dive a particular site in a month. We were there in the last week of a peak month and some sites were closed. Since this was our first time there, it didn’t make a difference to us which sites we hit (there were no repeats) but if you want to request a particular site, you might not be able to dive it if it’s the end of the month.
- They also have a limit on the max number of dive boats that can be at a site at a given time (this number is usually 2 or 3). The dive shops also space the groups going into the same site by at least 15 minutes.
- Minimum surface interval is 15min. I think the only reason this is even mentioned is because the boat rides from the beach and to/from the sites are super short and you could potentially do them very quickly. In general, we had around 45min between dives. The drawback here is that it almost seems like they’re rushing from site to site. The 2 dive trip is less than 3 hours or so which is probably why it is this way. Didn’t bother me too much but A definitely noticed and commented on it.

We dove 2 of the northern sites the first morning and 2 southern ones the next.

El Cantil “The Cliff” - Red filter bracket on our GoPro fell off at the very first entry, went without it for the entire trip :(
-> 43min, 41ft, 84F
El Bajo de los Morros “The Short Hill” - Ripping current, the guide later said it was the fastest he had experienced in the last few weeks and estimated it to be 6-7kt. I have no idea is that’s actually accurate or not, so I took his word for it. We saw the tornado of big eye jacks that’s one of the iconic images at this park.
-> 38min, 53ft, 86F 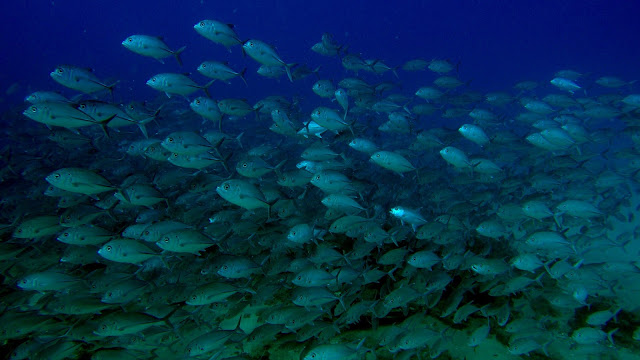 
La Lobera “The Rookery” - Sea lions in a shallow aquarium-like dive. No current, 100ft viz.
-> 53min, 23ft, 84F
La Paz
We stayed at El Angel Azul, a couple of blocks from the Malecon, and dove with Fun Baja. The dive shop has multiple shuttles and pick up+drop off at your hotel is included. All the dives are at Isla Espiritu Santo which is a 1.5-2hr boat ride from the marina. The sea was generally choppy all day long with periods of significant swell. If you get sea sick or are not comfortable on a pitching boat, this will be a difficult trip. Current at the dive sites was mild to non-existent but they had a safety line from the boat at all times. Viz is lower than Cabo Pulmo and murkier as well. They usually have 1 guide per 4 divers but you can do your own thing if you want to. Lunch is included on the boat but is pretty basic (tuna salad sandwiches on both days). Much longer day trips overall - leave marina at 9AM, return around 4PM on 2 dive days, 7PM on 3 dive days.

We did 3 dives on the first day and 2 on the next followed by a whale shark snorkel.

Fang Ming - Chinese vessel that used to bring illegal immigrants into Mexico, impounded and sunk as an artificial reef. Easy swim throughs and penetration on all levels except the very lowest one.
-> 40min, 70ft, 30-40ft viz, 80F 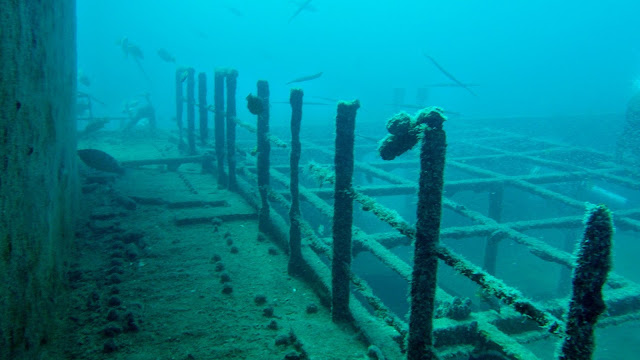 Los Islotes - This is the one you want to do to play with the sea lions. There’s a little cave where a lot of the 4-6 month olds hang out and they looove to play with your fins, dive bomb you from above and get petted. There’s some that are a little older and more aggressive - I have a hole in my dive skin and a bite shaped bruise on my shoulder that can attest to that. This site has a lot of sardines this time of the year and it was great fun watching the sea lions chomp their way through the bait balls.
-> 55min, 51ft, 50-60ft viz, 84F 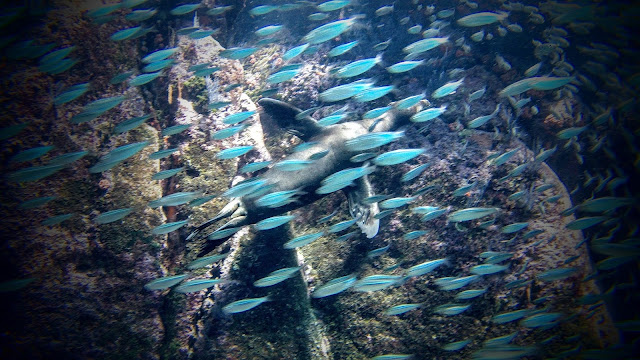 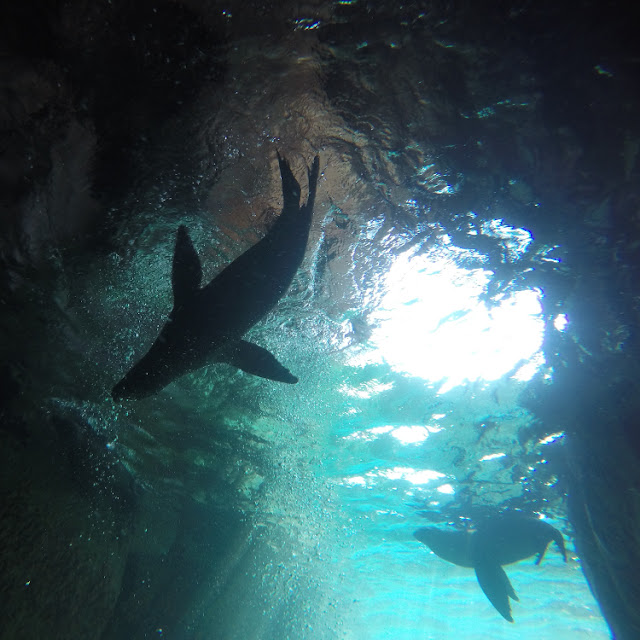 Swanee Reef - Nice and easy 3rd dive for the day. If I was doing macro photography, I would have parked myself here all day long. Also had the largest stonefish I’ve ever seen.
-> 44min, 31ft, 30-40ft viz, 82F 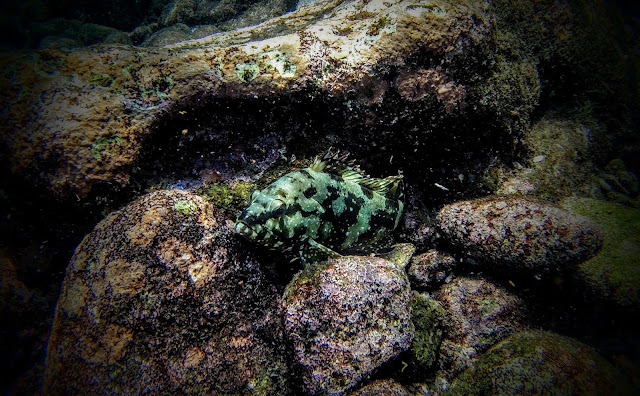 Punta Lobos “Old Sea Lions’ Colony” - No sea lions any more but you come here for the mobula rays. Not huge numbers but we saw a few groups of 3-4 mobulas. I have to admit, this dive was pretty disconcerting for me. I’m not really sure what classifies as a blue water dive but this is the closest I’ve come to one. We were at around 100ft with nothing more than featureless sand 40ft below us, blue water all around and the almost ghostly shapes of the rays swimming off in the distance. I was acutely aware of how deep I was and kept checking my depth and pressure gauge every few seconds. Dark narc, perhaps??
-> 40min, 98ft, 40-50ft viz, 82F 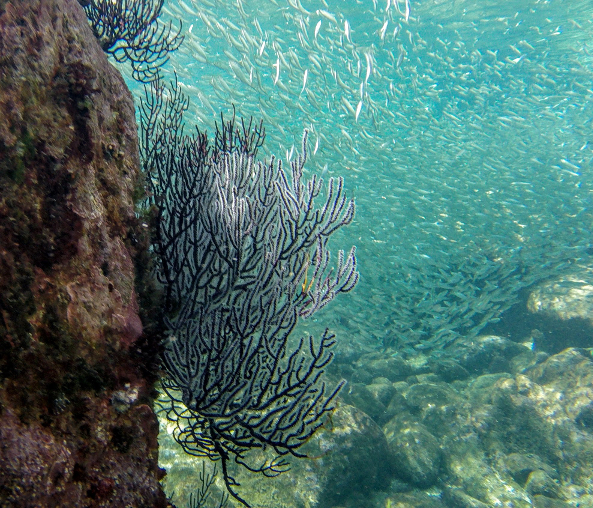 La Salvatierra - I think this was one of my favorite dives of the trip. A ferry boat that ran aground on Swanee Reef and broke apart. No penetration but a lot of character with broken sections of the ship, truck wheels and crates of cargo strewn around everywhere. Lot of green morays. This was the one dive where I wish I had brought a more powerful light with me - parts of the deck had disintegrated and you could see the entire hold inside with lots more stuff.
-> 46min, 57ft, 30-40ft viz, 80F 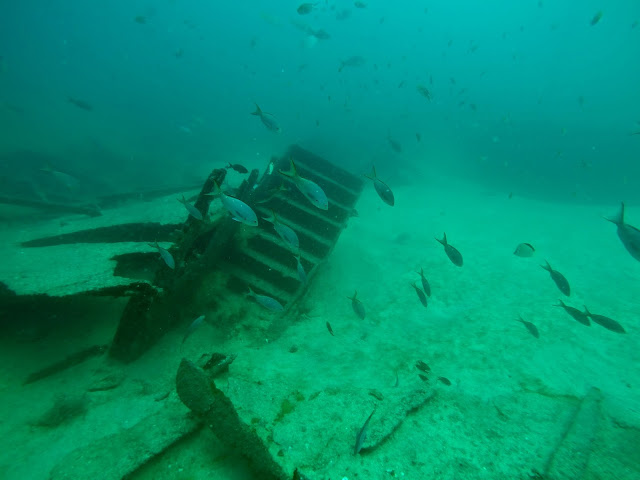 Snorkelling with the whale shark - Holy crap, this was an intense experience. We spotted a pretty large one for this area (~25ft long) and were less than an arm’s length away for 10-15min swimming with it. I almost swam right into the thing after we jumped into the water, scared the bejeezus out of me.

Another option for La Paz is to camp out on the Isla Espiritu Santo and dive from there. A lot of dive shops have camps set up - we’re going to try this next time and avoid the long boat rides.

Overall, this was a great trip. The ease of getting there from the SF Bay area makes it doubly attractive for repeat trips. In terms of number of dives done, it wasn’t the most efficient dive trip but I’m glad we got to see both places - next time we go will be just to one spot and spend the entire time there.