After a handful of shaky drysuit dives, A and I decided the best thing would be to get some additional instruction. We got a hold of Beto and set up a clinic.

We spent a few hours at the LDS pool to go over some pre-dive and dive techniques and also re-adjust our harnesses. Man, it's amazing how much difference a few steps make - this was the result after only a few minutes in the water.

A had similarly satisfactory results and we were pretty stoked with our experience so far.

We had scheduled an ocean dive day during the week and decided to go to Point Lobos instead of the Breakwater. This was our first time diving there and we were both pretty excited about it. Beto gave us the lay of the land and introduced us to the infamous boat ramp. After a quick weight check, we headed off towards the Worm Patch to do some skills and have a look around. We were in the water at the peak of the high tide and viz was pretty good, ~30-40ft. We saw the usual rockfish and perch but they were a lot bolder than I'm used to at the Breakwater. I guess being in the reserve changes their attitude a little bit. Beto found a pipefish and was super excited (he told us later that they're reasonably uncommon inside the cove). We did a bunch of ascents and descents from and to 30ft. I was a lot better than before but still need a lot of work - surprisingly enough, my ascents were comparatively more controlled than the descents. We swam back to the ramp and did a final weight check. Both of us were pretty close to ideal already so that went quickly too. With the weight checks and in-water debriefs, we were in the water for more than 90min and were starting to get cold. The viz was also starting to deteriorate as the tide went out so we called the 2nd dive.
-> 35ft, 66min, 55F 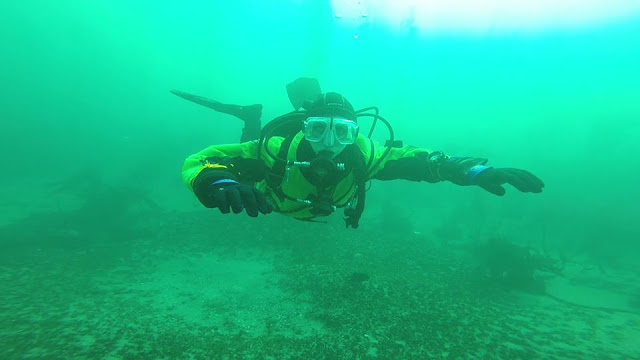 Post dive at Hula's - with the video review Beto told me that my Fundies 1 provisional pass had been converted to a recreational pass. Woohoo :)