I went on a 3 day trip (3/24-26) to the Northern Channel Islands with Truth Aquatics last week. It was scheduled to be on the Vision but was transferred to the Conception due to mechanical issues (the boats are practically identical). It was a very light load with only 15 divers on board and 6 crew. It was my first liveaboard experience and I thoroughly enjoyed it.


A and I were supposed to dive together but a week before the trip, she had to cancel. Truth Aquatics was very accommodating and transferred her deposit to my balance as well as letting me keep the double bunk.

We drove down to Santa Barbara the day before and spent the night on the boat. The double bunks are stacked 2 high and the single bunks 3 high. I had an upper bunk which was great 'cause it looked like I would have needed a pretty good tuck and roll to get into the lower ones.

The bunks have vinyl covered foam mattress with a pillow and a blanket - I took a sleeping bag but would bring a sheet next time. Also, there was next to no storage in the bunk room beyond a couple of hooks to hang stuff from. I had a backpacking pack but would try to take an even smaller bag next time. 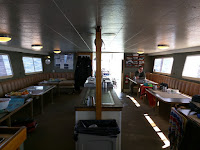 The common area has 6 tables which easily sat 6 each. The galley is compact but the crew prepared some amazing meals in there. There's a bunch of different soft drinks and water on tap. There were 3 hot meals a day (breakfast at 8, lunch at noon, dinner at 6) with snacks and fruit set out all day long. Oh, and a plate of bacon after practically every dive :) 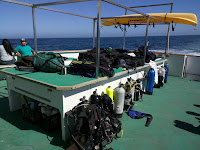 The dive deck has a large central table with tank racks on it's side. It's flanked by 2 benches that we used to get in and out of our rigs. They have long whips and tanks are filled in place. EAN32 is $6 a fill and they consistently filled my HP100 to 3000-3100psi. There's hot saltwater hoses for those diving in wetsuits as well as fresh water showers to rinse. There's a gate on each side of the boat where you can giant stride from (it's about a 6ft drop down to the water). Or you can use the swim platform in the back.
If there's one thing about the boat I would change, it would be that darn swim platform. You have to use it to get back on and after 3 days of multiple dives, my knees were hamburger. Even with calm seas, I didn't particularly enjoy it - there isn't much to hold on to when you have to get up and off your knees, I ended up crawling to the steps.

The dive windows were usually 8-noon and 2-6 with a night dive after dinner. Sometimes we did 2 dives at the same site or a short move within the window. During lunch, there was a longer transit to a slightly farther dive site.

We did all our dives at Santa Cruz Island - water temps were in the 53-59F range and it was bright and sunny topside. There was some current on all the sites but easily manageable. Surge was a bigger factor for me and there were a couple of occasions where I had to work pretty hard when I got tossed around. Viz tended to be in the 30-40ft range.

The conditions that week were pretty rough with a strong NW swell on almost all the days, 8-12ft combined seas. There was a gale warning a couple of days before the trip and a small craft advisory during. Consequently, we stayed on the sheltered south and east side of the island in the protected coves. Even with this limitation, the captain found us a good variety of sites although they were quite shallow (70ft max).
We hit Fry's Cove, Hungryman's Anchorage, Todd's Rock, Blue Banks Anchorage, Coches Prietos West & East and Albert's Anchorage.

I had my GoPro but the quality of photos/videos I took was balls as usual (the ones above were the only passable ones). They don't do any justice to the diving we had.

The much, much nicer photos below were taken by Arlo White, who was on the same trip. 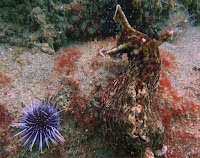 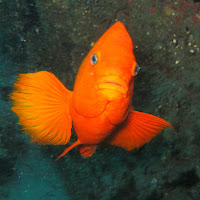 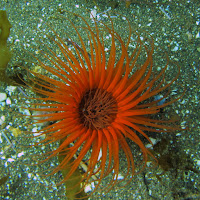 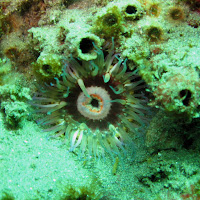 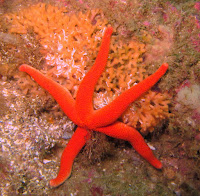 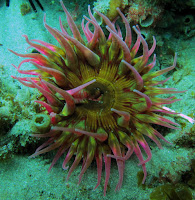 And these amazing videos were shot by Peter Brink and Tom White (with the photon cannons he filched off the Enterprise), who were also great company on the boat. They got great shots of the beautiful nudibranches we saw as well as the Godzilla sea hares.