sea_otter had a reservation to dive at Pt Lobos and with a very calm swell prediction, we headed out as usual. There was a ton of surface kelp in the cove with no discernible channel - the surface swim for the first dive was going to be a bear :/


We swam out, dropped in our usual spot and took a NNE heading with the intention of finding Hole in the Wall (which I still haven't seen). Visibility was decent, around 30ft, but there was a lot of large particulates in the water. I'm gonna go with whale snot.
We weren't looking for the sand channel, instead choosing to swim over the slightly rubbly reef on the left side and spotted the usual contingent of Monterey dorids along the way.
We hit turn pressure around 70ft without seeing Hole in the Wall and headed back in. A squirrelly ascent, with liberal kelp grabbing for stability, brought us back pretty much where we had dropped.
-> 70ft, 50min, 50F

We  chatted with raftingtigger and 3Ddiver during our surface interval and got some tips on finding HITW (take a heading towards the last bird poop rock at the drop point). Refueling (leftover garlic bread from 2 days ago, mmmmmmm) and a tank change later we were back in. 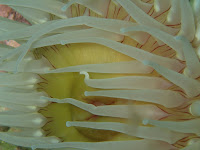 This time, the plan was a little more fool proof - Middle Reef. The swell had pushed the kelp towards the east side of the cove which made the surface swim a lot easier. The visibility was about the same, albeit a little clearer than before. I had the bejeezus scared out of me when I swam over some large lings and failed to notice them until they moved away when I was practically on top of them. sea_otter's backup light twisted itself on and there was some faffing around as I tried to communicate that to her. We rounded the end of Middle Reef with plenty of gas to spare and decided to continue going around on our way back in. Just around the overhang, I saw what I thought was a large horizontal crevice in the rock and went closer to take a look inside. Bejeezus scared out of me again as the crevice wasn't a crevice but another humongous ling. This is the first time I've seen one which such a dark coloration - it was almost completely black. We continued on the back side of the reef and sea_otter seemed confident in her navigation skills to get us back close to the worm patch. I shared that confidence until we ended up in about 20ft of water surrounded by some pretty thick kelp. Remember when I said the swell pushed the kelp to the east side of the cove and made our surface swim out super easy? Yeah, east side of the cove is exactly where had ended up. We ended up clawing our way back through the salad pretty much the entire way across.

A fun day of diving was capped off by an absolutely beautiful day topside. 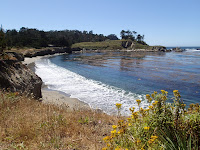 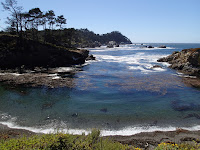 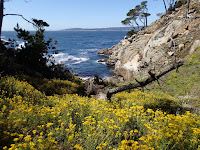 Hole in the Wall eluded us once again but we think we have a better plan for next time.
All photos courtesy of sea_otter.