My aspirations are starting to exceed the limits I'm under diving single tanks, primarily wanting to do DPV shore diving to sites slightly farther away and kinda-sorta-maybe cave(rn) training. With this in mind, I went about converting my gear to dive double tanks. 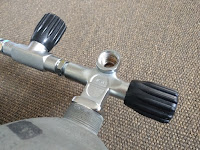 I got the bands from Dive Gear Express as well as their long neck manifold - both were well reviewed and significantly cheaper than the offerings from the big name brands. In addition, the long neck manifold reputedly makes the dreaded valve reachability easier. 2 of my 4 HP100s got conscripted into doubles duty after AWS measured and matched them up.

The regulator conversion was pretty straight forward as well, I already had an extra Apeks DST 1st stage which matched the one on my singles rig. A couple of hoses got moved around and that was it. The 1st stages don't have the bottom 5th port, which is supposed to make hose routing a little better, but I think this is a very workable solution to start off.

I'm a big fan of Deep Sea Supply and wanted to stick with their products for the backplate and wing. I could have used my existing steel plate but HP100s are a little short and tend to make you want to faceplant - a steel plate would have potentially exacerbated the problem by adding weight forward. I dug around the used gear listings and found the kydex plate for less than half the retail price - it was a shop display and in insanely good condition. I had spoken to Tobin about the wing and he recommended the Torus 49 for the HP100s, not just for the amount of lift but the shape of the wing. It's top biased and helps counteract the faceplant behavior of the tanks and is especially useful for newer divers. I got super lucky again and got one of these from a local GUE diver, again, for less than half of retail. 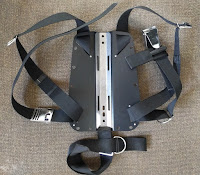 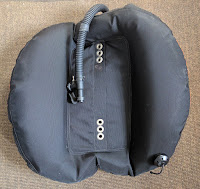 This is what the full rig looks like without any weights on it. I've signed up for a doubles workshop with Beto later this week - can't wait!!! 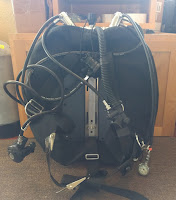