"This passage is a lot darker than yesterday but damn these formations are pretty in my light. I'm handling this a lot better than I thought I would after a day. Position on the line is good. Light discipline is good. Decent distance beh- HOLY CRAP IS THAT LINE ARROW POINTING IN THE WRONG DIRECTION?!?! Yep, it is. We talked about this, didn't we? Did we? Crap!!! Chilling out, no biggie. Just drop a REM cancelling it out. Dammit, how do you do this one-handed?" 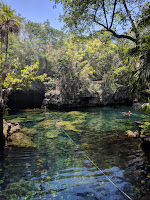 Since we'd established that I could maintain reasonable control of my faculties in the overhead, the training began in earnest - theory, land drills, in-water drills, the whole shebang. In hindsight, and considering how the week progressed, this was actually a very gentle slide into training mode. The main focus for the day was on line discipline and light protocols - sounds trivial but considering that's basically my lifeline and primary method of communicating in the cave, there was a lot going on that I had to be conscious of.

We briefed the path and waypoints of both the cavern lines in cenote Chikin Ha before getting in the water. This became our m.o. for all future dives and was a good way to visualize the cave before even getting in the water. Even with my complete inability to gauge distance and scale, it was useful nonetheless.

We dove both cavern lines going towards cenote Rainbow. This used to be one loop with a T but having 2 separate lines makes it pretty well suited for cavern training. Both lines were a lot darker than Ponderosa and there were significant periods of time when I could barely see the light from the surface. I actually liked the darkness better as the effect from my light in this zone was even more pronounced. I got a mega jolt of adrenaline when I realized I had to drop my very first marker on the line - a cave diving milestone for me :) My buoyancy and positioning got a little shaky in the excitement but it ended up fine.
-> 90min, 43ft, 75F

We ended both dives with a round of valve drills which confirmed that the Deep6 fins that I thought would work with the slimmer drysuit and light insulation were waaay too floaty. Looks like I would have to borrow Jets from someone in the shop for the rest of the week.