"Damn, it's weird holding the reel and light in the same hand. And that rock is slippery. I think it'll hold my primary tie. Yeah, it should be fine. That one on the right looks good for a secondary. Hey, this isn't so bad. Never mind, I take it back. I'm gonna tangle myself up pretty good here. Aaaand my secondary tie just slipped off. Yep, this is going well." 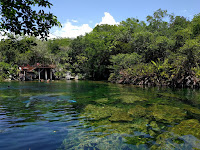 The past 2 days, Nat had run the reel from the open water to the lines but today was my day to start. She made it look absolutely effortless but I had full confidence in my ability to make a complete cock-up of it. We did a bunch of drills going over the various types of tie-offs in Nat's air-conditioned office using some really cool rock props. I didn't appreciate this enough until I saw a few other training groups doing the same in the heat, ants, mosquitoes and dog poop at the cenote.

We headed back to Jardin del Eden and the original plan was for me to try and tie in to as many lines there as time, energy and the crowd allowed. After the usual briefing and pre-dive checks, we dropped at the entrance of the River Run line. My first attempt at running the reel was trial by fire as there were 2 other reels already in place and a lot of the prime tie-offs were already occupied. This was a lot harder than I thought - the task loading is phenomenal and that threw the rest of my diving ability completely out of whack. I needed 28 min and almost 500 psi just to get to the mainline and make the tie-in. I disconnected and reeled up immediately to the surface. It was unbelievable how much energy I used and how tired I ended up after just the first attempt.

I ended up doing a couple more reel runs to the same line because of the crowd and, honestly, I was glad as I was far more tired than I thought I would be. The subsequent efforts were much better and quicker but positioning along the line continued to be challenging. Contouring is definitely going to be a big thing moving forward.
-> 79min, 45ft, 75F