"Arm up. Big loop up and around. Back down in front of me. Nope, nothing. Scootch forward a bit. Man, I can FEEL the silt I'm stirring up. Arm up. Big loop around. Ow. Did the back of my hand just hit something? Frick, those scalloped rocks are sharp. Wait, how did I hit it on the upward movement? There's no way I'm near the ceiling. Did she drop me below the shelf the line's on? She did, didn't she?" 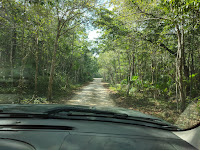 I was nervous for this one.
The lost line drill.

As far as things that are realistically likely to go wrong on a cave dive, this one freaks me out the most. The thought of being lost, even temporarily, in an underground-underwater labyrinth that goes for hundreds of miles gives me the chills even as I type this out.

Also, the entire area around the cenote has a whole bunch of Chechem trees. Why is this important? They're far, far more virulent than poison oak, ivy, sumac, et al. Word is that the reaction to touching any part of the tree sometimes looks like a chemical burn. This is the one site where we avoid the shade even in the sweltering heat.

The first dive was at the "A" Tunnel of Mayan Blue. This is a really good spot to do the lost line drill because it's silty and really dark. I mean all caves are dark but the formations here are actually dark even in the light. Overall, it felt completely different from any of the other lines I'd been on and, honestly, was a little creepy. The drill itself went fine both times we did it - I found the line in both attempts and had the correct exit direction but the execution had plenty of room for improvement.
I spoke to Marcelin about this dive later in the evening and he mentioned it got a lot nicer farther in. I'll take his word on that for now.
-> 61min, 58ft, 76F

At this point, we only had the lost diver drill left. For this, we went to the "B" Tunnel and Nat promptly abandoned me when I was running the reel, ignoring every light signal I was flashing at her. In the time it took for me to complete the direction referencing steps on the line, she had gotten herself neatly into a little cubby on the floor and roiled up enough silt that I could barely see her light. Good job. After that was settled, I got to see why Mayan Blue is called that. The water in it is blue. Not the kind of blue you see in the ocean but a bright cerulean blue that made the beam from my primary light look even more like a lightsaber than it usually does. The formations on this line were also super dramatic - lots of enormous boulders and slabs.
-> 36min, 68ft, 75F