Staying and diving with Aldora made our mornings super easy. Fall out of bed, walk out the door and on to the boat; dive rigs already set up and ready to go.
Generally, I'm not too thrilled when someone else sets up my gear but the Aldora crew did a bang up job. Our backplate+wing and longhose setups didn't faze them in the least (most of their DMs dived the same setup as well)- they saw me make some adjustments to my rig the first day and set it up like that for the remaining days. Awesome! At the end of the day, all we had to do was break our rig down and put it into mesh bags which they took back to the shop and rinsed off for the next day. Honestly, I'm pretty sure they would have done that for us as well but I preferred to do it myself. This was my first experience with a full service dive op and I was thoroughly impressed by Aldora.

Another good thing about diving with Aldora is that they use higher capacity steel tanks instead of the standard AL80s. I was setup with an HP120 and A had an HP100. HP120s are noticeably longer than anything else I've dived and it's not the easiest to manouver on the surface; not a huge problem in a 3mm shorty but I wouldn't want to deal with them in a drysuit. Having all that gas was pretty sweet though.

Since this was our first time diving in Cozumel, Aldora took us to what are essentially the check-out dive sites on the first day. Our first dive was at Palancar Gardens and our DM, Ricardo, gave us a few tips on dealing with the current. The only other people on the boat were another couple, one of whom had just finished her OW class. Initially, Ricardo herded us around a little bit but after seeing A and I in the water for a few minutes, he focussed on the other divers for the rest of the dive. There was very little current by Cozumel standards but I managed to ignore everything he had told us earlier about avoiding it and found the worst spots around the reef for that. This was mainly because I was trying to avoid getting kicked by the other couple who were not very conscious of their position in the water. I ended up kicking against the current more than I should have but the big tank more than made up for that. The visibility was absolutely amazing, I'm guessing around 80ft or so but, to be honest, I kinda have no idea once it gets beyond the 30-40ft I'm used to at home. There were multiple varieties of parrotfish (my favorite), jacks and angelfish and some huge groupers followed us around as we swam through the rocks. We also saw a hawksbill turtle on the first dive which was awesome. I also liked the huge barrel sponges with cleaner shrimp in them.
-> 81ft, 54min, 84F

The surface interval was on a private beach that has a cafe and some chairs to relax on. I spent the hour there walking the beach, splashing around in the shallows, attempting some horrendous still photography with the Gopro and getting pretty burned; A made the smarter choice and napped. 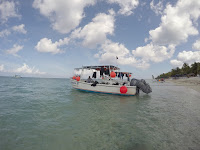 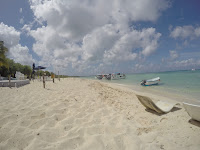 The 2nd dive was at Tormentos Reef which was quite similar to Palancar. I saw a midnight parrotfish, which I hadn't seen before, and a couple of barracuda!! This was my first time seeing them and I was really looking forward to it. A assured me that these ones were pretty small and there's much larger ones in the Keys (yeah, we're going there next). It got surprisingly dark halfway through the dive and I didn't quite understand why until we got to about 20ft and I saw raindrops on the surface when I looked up. Turns out it wasn't just a few raindrops but a pretty epic thunderstorm that we surfaced to - a hasty re-entry into the boat later, our little boat hauled (and I mean HAULED) back to the dock.
-> 65ft, 60min, 84F

We ate at Mar y Juana later that day - it was OK, not the best on the trip. I thought the name of the restaurant was quite poetic, like "Juana and the Sea" or something along those lines. In hindsight, it was quite obvious that that's not at all what they were going for considering that the staff was wearing Rasta hats and dreadlock wigs :P A was quite amused that I didn't figure that out on my own. Like, at all.