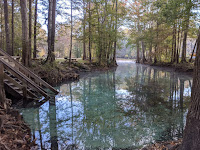 Not-so-little bitta flow. The nervous butterflies in my shaky stomach were jittery.

I had totally lost track of what day it was and didn't realize it was the weekend. No place open early enough to pick up food meant a hasty peanut-butter-on-a-bagel for lunch. We were going to do the first half of the day on EAN32 and the second half on 30/30 as part of the triox endorsement for the class.

The conditions report indicated moderate flow by Ginnie standards but it was plenty strong to beat me up over the course of the day. We did all dives through the Ear and tried to pick the best spots we could tying in the reel and also through the Gallery. My vertical awareness of space needs some tuning because there always seemed to be far more space above me than I thought. Bubbles was far better at kicking in the flow than I was and left me in his dust on one of the dives. Watch my light, bruh.

Failure handling wasn't as bad as I thought it would be especially because we had gotten a lot of practice with various scenarios already. The focus on these dives was to try and find good spots to stabilize and fix the problem so we didn't get blown around by the flow.

The lost line drill reinforced a few facts about cave line.
- Properly stowed and tensioned cave line is Lawful Evil. Follow the rules, be vigilant about and around it and you can escape its malice.
- Loose line is Neutral Evil. Just looking for a chance to mess with you. 50-50 if it actually will.
- Loose line in flow is Chaotic Evil. Will fuck your shit up just 'cause.

Strangely enough, I worked way harder when I was on triox for the last 2 dives, compared to EAN32 on the first 2. I think the easier WoB just made it easier for me to suck in far more gas than I needed (??). 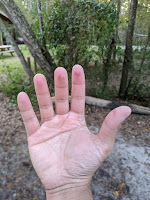 The Devil took its toll. My fingers were dry and chapped already from the last few days of diving and a tired pull-and-slide took it to the next level.

Dinner at New York Pizza Plus in Alachua was super satisfying 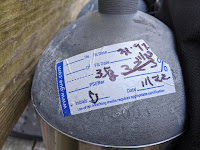 Also, what the fuck was I doing with this gas analysis sticker?!? What makes this even more mystifying is that this was before my fingers were abraded raw.