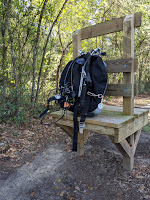 Tank tables in the parking lot?!?!
Yes, please. We need these everywhere. Convenient as heck with the Big Bertha HP130 doubles.

Bubbles and I had planned on a shakedown dive before the class - Mer recommended a couple of suitable sites and we settled on Troy Spring State Park due to it's proximity and relatively deep open water area. We were specifically looking for a place where we could do drills in 20ft midwater. Little bit of an annoyance when we got there and found out no lights are allowed in the water - apparently, this is an oft ignored rule by folks who dive there regularly.

We got in the water and nothing leaked, bubbled or exploded. I had been inordinately stressed out about my drysuit's zipper getting smooshed in my roller carry-on but everything looked fine. The 60lb wing  with the big tanks weren't noticeably different either.

We swam around for a bit and took a peek at the water boil in the sand before starting on the usual regimen of valve and S-drills. No one had forgotten anything super important which was good considering we had done pretty much the exact same dive just a week ago. There was a bit of excitement towards the end during a gas sharing ascent when both of us forgot to vent our drysuits and wings.

We ended with a weight check - HP130s take forever to empty out. I had done some hand wavy math and thought I would need 4lb of lead with my setup but was convinced by Kyle at EE that I would need no weight. He was right. When someone who's been diving caves in this exact same setup for years and years, I would say it's a safe bet to take his advice.

Bubbles decided he wanted to lengthen his shoulder straps in the water which was semi amusing to watch until I realized he was looking for something to breath with. Details.

Frozen pizza for dinner because everything in High Springs was closed on Monday.