And, before we even realized it, the trip was almost done.

The last day of diving was pretty mellow as we worked our way back up towards Kailua and dove at the Turtle Pinnacles. Supposedly, there's tiger sharks seen around here due to the presence of turtles and I was shown a fairly terrifying video of a dive at this same location when one decided to turn up and swim among the divers :O

In addition to the warm towels greeting us at the end of the dive, there was also beer waiting for us at the swim step.  My cabin buddy, SwissMiss, hit dive #700 and got caked to celebrate. More beer to wash it down. 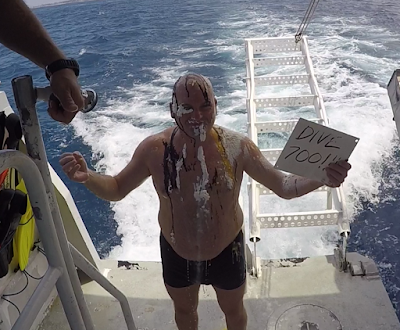 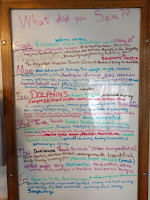 At the end of the day, the Iron Diver medals were presented with more beer to celebrate that.

We had been keeping a running list of all the cool marine creatures we saw during the week and it was really cool to be able to look back at all of them and recall the dives over a few more beers.
Fun trip. Uh, beer.