First day of the trip and it was a day of trying to get used to the rhythms of the boat. I didn't sleep very well but was looking forward to getting in the water. We had set up all of our gear the previous evening and we were able to splash in pretty much immediately after breakfast. One of the things I appreciated the most during the trip was the one time setup and then not having to do anything to my rig for the entire week.

Our first dives were at the Kaloko Arches and I was really pleased with how well my weighting worked out. The warm water and practically endless visibility was great and we saw a lot of fried egg and speckled nudibranchs, spotted eels, bird wrasses, a beautiful zebra moray and a couple of milletseeds which were known to live on this reef.
-> 2 dives, 55-58min, 55-70ft, 80F 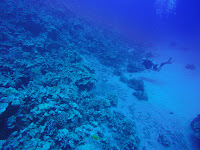 The afternoon dives were at Garden Eel Cove and the plan was to stay there for the night dive with the mantas. This was a semi circular rubbly site with a lot of healthy reef sloping down to the sand at 80ft. There were sidespot and manybar goatfish actively foraging for food and a black stripe coris hovering around them. The highlight of this dive was the two dolphins we saw - one of them was rolling around in the sand and the other looked like it was tossing around and playing with a sea cucumber. It was super fun to watch them do their thing; they looked like they were having fun too and we hung out and watched them for quite some time until another dive group charged towards them and scared them off.
-> 2 dives, 52-57min, 60-75ft, 79F 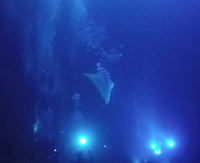 The last dive of the day was the manta mayhem / madness / magic dive. Honestly, I was a little disappointed with this dive overall. We had a couple of mantas show up in the beginning of the dive but nothing after the first 15min. That was fine in itself but what made the dive meh for me was the sheer number of people in the water - there were at least a 100 divers with lights on top of the snorkelers. It ruined whatever effect this dive is known for.
-> 48min, 48ft, 79F 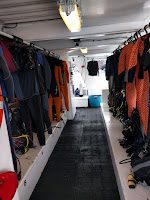 The end of the first day's diving brought some lessons for me. Mainly, that having my DSMB and reel on my hip D-ring was a terrible idea as the spool completely unraveled on one of my entries. I might have to go back to using the pocket shorts with wetsuits. Also, donning a wet diveskin is super uncomfortable, especially in the wind tunnel that was the gear area. One lady had brought five skins with her and was cycling through them during the day - this is a splendid idea and something I'm going to do for future liveaboards.

The diving on day one was great but I was more tired than I thought, mainly because I just couldn't get settled in to the boat schedule. I'm pretty confident this is going to improve by the next day or two.