Mugged by a milkfish

The last full day of diving and it was, by far, the best of the trip.

The first dive was at the Catacombs and, appropriately enough, there were a lot of cool swim throughs, caves and grottos in the rock face. We didn't move around a lot but there was tons to see and explore. A fairly large school of Heller's barracuda kept me company on the ascent back to the boat. What is it with barracudas doing this with me?!?!?! The exact same thing happened in the Keys.
-> 59min, 58ft, 78F 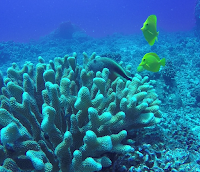 The next dive was at Thompson's Reef. This is another one where I don't really recall anything specific about this site except that I managed to finally get a photo of the usually twitchy hawkfish perched in antler coral.
-> 56min, 56ft, 79F

The afternoon dives were at Au Au Crater and this was, hands down, my favorite site of the trip. On the first dive, we swam over the shallow reef and then down into the crater. We found a gigantic Titan scorpionfish and a lot of nudibranchs. The crater itself was beautiful and the open side of it dropped pretty steeply down into the depths. On the second dive, we went along the deep end of the wall and ended up in the crater from the open end - it was really cool entering the crater this way. And, to top it off, we saw an eagle ray swimming circles inside the crater, right underneath us!!
-> 2 dives, 55-58min, 65-68ft, 79F

The last dive of the day was the highly anticipated Pelagic Magic dive. This is basically where the boat goes about 3-4 miles offshore and drifts while the divers hang underneath it, waiting for the nightly migration of billions of deepwater zooplankton to the surface to feed. I was relatively nervous about this dive considering we would be in the pitch black, with the sea floor 3000ft below us :O The dive briefing was pretty hilarious and that definitely helped. It took me about 10min to stop freaking out and release the death grip I had on the down line, but once that was done, the dive was absolutely mind-blowing. I can't even begin to describe the different kinds of jellyfish, slaps and other organisms that showed up, blinking, glowing and pulsing in my light. There were schools of squid and milkfish swimming around as well and I got bumped by them more than once. The milkfish were following my light a lot more intently than I thought (and were larger than I thought) and I somehow managed to track one right into my face. Saying I was startled would be an understatement - the fish basically swam full speed into my mask. That was fun. Made my eyes water and nose tingle for the rest of the dive but fun nonetheless.
-> 51min, 32ft, 79F