The morning dives were at Pele's Playground. Honestly, I don't remember anything specific about them - the number of dives I've done over the past few days are kinda starting to blur together.
-> 2 dives, 60-63min, 42-43ft, 77F

In the afternoon, the boat moved to Manuka Bay which was the first mooring where there was a beach. I didn't realize just how much of Big Island's coastline was jagged and rocky until I specifically noticed the sand here for the first time this week. 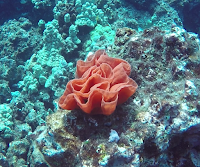 The reef at Manuka Bay was different from what we'd dove so far - there were finger reefs with very shallow relief but still a lot of horizontal and vertical swim throughs. There was a fair bit of surge which made swimming through the overheads, uh, exciting. There was a fairly large peacock flounder in the sand and the usual assortment of smaller reef fish everywhere. I saw quite a few Spanish dancer egg clusters around as well but none of the nudibranch.
-> 2 dives, 60min, 40ft, 77F

The night dive here was far more fascinating. We found a jolly green giant nudibranch (which is a very rare sighting), a few octopi, a hermit crab in a Triton trumpet shell and a large moray hunting for dinner. We spent a good amount of time following the eel through the reef and watched it absolutely slam a yellow tang before it retreated into a crevice to chow down on it.
-> 49min, 44ft, 77F 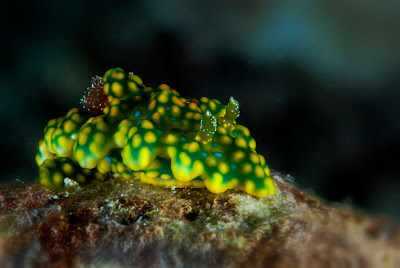