The morning dives today were unique in the sense that I found them to be more topographically interesting than anything else. That's not to say that there wasn't cool marine life around, it was just overshadowed by the dramatic underwater vistas. 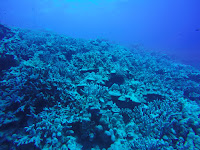 The dive at Lion's Den had lot of sharp edges and cliffs, none of them very deep, but dramatic nonetheless. For whatever reason, it reminded me of the scene in the Lord of the Rings at the pass of Caradhras. I should clarify that I was NOT replaying the scene verbatim in my head - 'cause, really, what kind of nerd would even remember that?
-> 60min, 68ft, 77F

The next dive was at Rob's Reef and the best/scariest part was the sea cave. This wasn't a small chamber like the sea cave at The Dome. It went into the cliff at least 30-40yd and was completely dark inside, even during the day. As I got farther in, it narrowed down considerably as well and that's basically when I gave it the big ol' nope.
-> 58min, 38ft, 79F

I've been flirting with the idea of technical cave diving for some time but the experiences in the last few days are making me rethink that idea - I'm realizing that I'm not a fan of enclosed spaces outside the light zone.

The boat moved to the Hive after these dives and we spent the rest of the evening there. This was where the frogfish, endemic to Hawai'i, made their presence felt in force. We found at least five of them in a couple of different colorings. They were #1 on my list of aquatic life I wanted to see on this trip and I was not disappointed. They reminded me of something out of a kaiju films with all the weird bumps all over them, the oddly shaped fins/flippers and the lumbering way they moved around. There was also a day octopus sighting with it changing colors pretty quickly as moved around us and a couple of leaf scorpionfish. We had the closest sighting of this trip of a green turtle on the second dive as well as a lava tube swim through that was filled with dozens of banded lobsters.
-> 2 dives, 63-64min, 47-53ft, 79F 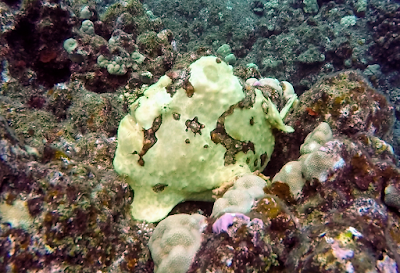 The night dive was also at the Hive and was one of the most varied in terms of the life we saw. There were multiple cusk eel and octopus sightings as well as some small schools of unicornfish. There was also a unique looking 7-11 crab and a lobster that was carrying an urchin in its mouth.
-> 61min, 46ft, 77F

The hot showers on the dive deck were starting to make themselves more and more useful by this point. The hot towel after the rinse was also something I had become quite enamored with.