It took a day but liveaboards are starting make waaay more sense to me now.
Dive and meal buddy groups were starting to form, the schedule was making more sense, the constant flow of absolutely delicious food kept energy levels up and the ability to get completely dry after every dive was absolutely amazing.

The morning dives were at the Aquarium Reef and featured the first lava tube swim throughs for the week. We had reports of harlequin shrimp seen at this site a week or so ago and considering how rare they are, we spent a fair bit of time with our noses in the cauliflower and antler corals looking for them. I found a lot of cool looking coral guard crabs this way and Celia did end up finding not one but two of the elusive shrimp. I also found two orange mouth lizardfish that were pretty well camouflaged on the reef.
-> 2 dives, 57-60min, 45-50ft, 80F 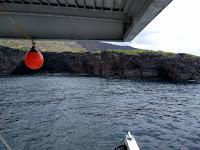 That afternoon we headed to the Dome. This was a large site with a bunch of caves and swim throughs and varied topography all around it, all teeming with life. During the day dives, we saw blue dragon nudibranch, yellow coris, devilfish, tiger cowries and a horned helmet snail that was fed an urchin.
One of the coolest things I saw on these dives were the coordinated hunts being done by the eels, goatfish and trevally. The eels stayed inside the corals, the goatfish just outside and the trevally a little off of it and between them, they corralled the smaller fish into each others' target areas. It was pretty amazing to watch how much in sync they were.
-> 2 dives, 57-61min, 52-64ft, 80F

The night dive was also at the Dome and was a slightly eery experience for me. The sea cave we had swam in earlier today felt more like a true cave due to the almost complete darkness. The tiger cowries, Spanish dancers, pimpled baskets and white margin nudibranchs inside the caves were very cool and there were also a bunch of slipper lobsters and giant porcupinefish about.